The FTAC has three board members. Together they form a collegial board which performs the duties as directed by the provisions of the National Ordinance on Competition, with the support of the bureau.

The board members are appointed and dismissed by National Decree (in Dutch: Landsbesluit). The following members were appointed for a period of four years: 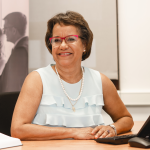 Article 2.15 of the National Ordinance on Competition stipulates that the FTAC must have “Rules of Order” in which the cooperation between the board members is described in further detail. Click here for the Rules of Order (in Dutch).